In September 2017, the Southbound Interstate 95 (I-95) to Eastbound State Road 202 (SR 202; also known as J. Turner Butler Boulevard) Flyover Bridge was opened to traffic in Jacksonville, Fla. The structure allows for a continuous flow of traffic through the interchange and provides a significant upgrade to the previous configuration of an off ramp with a traffic light, which led to traffic backups of a mile or more on I-95 during peak travel times.

Among the many challenges faced during the design-build process were the constrained jobsite conditions due to the heavy traffic volume on each roadway at the interchange. In just seven spans, this bridge has three major traffic crossings in an interchange that carries more than 200,000 vehicles per day. The Florida Department of Transportation (FDOT) required that all lanes remain open for the duration of construction and permitted only nighttime traffic closures, which limited construction operations to a maximum of 8 hours per day. A Project Profile article, “Southbound Interstate 95 to Eastbound State Road 202 (J. Turner Butler Boulevard) Flyover,” appears in (ASPIRE® on page 26; this article focuses on the precast concrete pier caps.

Precast Concrete Pier Caps Provide Construction Solution
With all lanes open to traffic during construction, four of the six interior piers were adjacent to active traffic as the bridge was built. This situation eliminated the possibility of the typical cast-in-place (CIP) pier caps because the shoring would interfere with traffic. Additionally, any solution needed to provide at least 16 ft 6 in. of vertical clearance. Precast concrete pier caps ultimately provided the
best solution.

The contractor chose to fabricate the pier caps on site, but away from traffic. The minimum clearance was easily maintained, with the bottom of the precast concrete cap at least 17 ft 6 in. above the roadway. Additionally, the precast concrete caps were used to support girders during construction, minimizing the amount of temporary falsework required for the project. 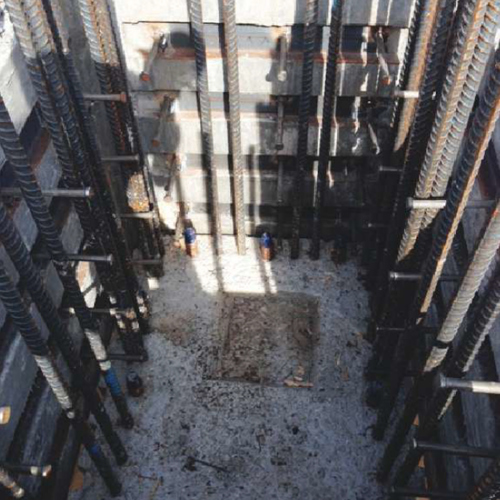 Precast Concrete Pier Cap Design
The design of the precast concrete pier caps focused on a time-dependent, staged-construction analysis. This approach allowed the designer to ensure that the caps would perform as intended and
meet all FDOT and American Association of State Highway and Transportation Officials’ (AASHTO) design criteria through each stage of construction and the full life of the structure. Loadings at each stage were considered, and time-dependent effects over the life of the structure were analyzed and included in the design.

The precast concrete caps were designed to be handled and erected as mildly reinforced components prior to the application of any post-tensioning. Designing the caps this way allowed the contractor flexibility in scheduling the erection of the caps and their phased post-tensioning.

Column-to-Cap Connection
The column-to-cap connection is one of the most important and interesting aspects of the design. The connection needed to transmit out-of-balance loadings during girder erection and work in concert with the CIP diaphragms to transfer all composite loads to the column. Each interior pier was designed with a single 7-ft by 4-ft column. The precast concrete cap was constructed with a full-depth vertical blockout that is 1 in. larger than the column cross-section dimensions. All the reinforcement from the column projected through the blockout and was developed into the CIP diaphragm.

Within the blockout, four rows of steel channels (C6) were installed to create four continuous shear keys around the perimeter of the blockout. The pier cap was erected by threading it over the column reinforcement and bearing on temporary support brackets. Once it was in place, 10-in.-long shear studs were welded to the C6 channels and the blockout was cast with concrete that was the same class as the column concrete. The governing design condition during construction was the out-of-balance loading that occurred when the first girder was erected onto the pier cap.

Multiphase Post-Tensioning
The staged post-tensioning is another important aspect of the design. Each precast concrete cap was designed with four post-tensioning tendons with twelve 0.6-in.-diameter, 270-ksi strands each. All four tendons are located at the top of the section to provide negative moment reinforcement and control stresses. The tendons in the caps were tensioned in two phases to accommodate multiple loading conditions through several stages of construction. After the column-to-cap connection concrete was cast and cured, the first two tendons were tensioned and grouted. Next, the precast concrete girders were erected and the final two tendons in the precast concrete cap were tensioned and grouted.

During the design review process, the design team and FDOT discussed whether the CIP column-to-cap connection would behave in a fully composite fashion with the cap. To account for the range of various possible behaviors, the designer bounded the solution by considering both fully composite action and zerocomposite action at the connection. This approach gave the owner confidence in the construction method. The phased post-tensioning was designed to work with both solutions. 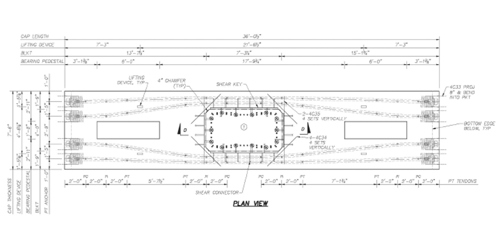 Diaphragm Composite Action
After erecting the pier girders, the integral diaphragm was cast. The CIP diaphragm was designed to act compositely with the precast concrete pier cap. To ensure composite action, the tops of the precast concrete caps were roughened to ¼-in. amplitude and reinforcement projected from the cap into the diaphragm. Both post-tensioning tendons and the reinforcing bar projected through sleeves in the girder webs to tie the diaphragm and girder together, developing integral action for the final design loadings. The diaphragm was designed with conventional reinforcement and three post-tensioning tendons with twelve 0.6-in.-diameter, 270-ksi strands each, which were tensioned prior to casting the deck and would resist the noncomposite dead load of the wet concrete deck as well as the composite dead and live loads of the final structure.

Conclusion
By using precast concrete pier caps in the design of the Southbound I-95 to Eastbound SR 202 Flyover Bridge, the designer and contractor overcame significant issues during construction. The caps were designed as a complementary piece of the structure that helped enhance the aesthetics of the bridge, and they were an integral part of the collaborative process that made this project a success.

I would say that in terms of using this type of spliced precast construction, we were able to bring our experiences to bear in a way that it solves more problems per foot than any project we've been faced with in the past. (Gregg Reese, PE | M&M Project Manager)

2022 Masters of the Trade Scholarship Winner